The Footsteps Of John Paul II 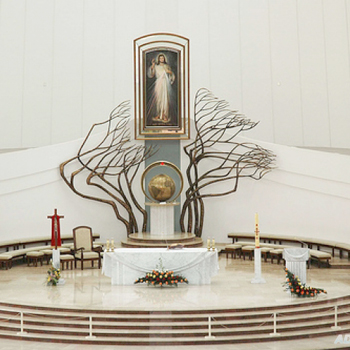 The tour gives you a chance to follow in the footsteps of the man who was to become one of the greatest Popes and human beings in history.

Our tour begins with a visit to Wadowice, "the place where it all began" as the Pope referred to his hometown in 1999 during his visit here. We will see the dearest places to Karol Wojtyła during his childhood and adolescence, including the parish church where he was baptised and the house where he was born. Our journey to and from Wadowice also gives you a chance to view the peaks of the Popes beloved Beskidy mountain range where he used to hike. On return to Cracow we stop at the Sanctuary of Divine Mercy in Łagiewniki. In this developing place of pilgrimage you can pay homage to the holly relics of St. Faustyna Kowalska, who was canonised as the first saint of the Third Millennium by John Paul II, and admire the impressive modern basilica consecrated by the Pope in 2002. Then we travel to the foot of the Royal Castle to visit the Archdiocese Museum located in the most picturesque street of Cracow. In the museum you can see the flat where Karol Wojtyła lived while working as a lecturer of theology. Finally, we visit the Archbishop's Palace which is Wojtyła's last residence before leaving for the Vatican in 1978. There one can see the famous "papal window", where John Paul II used to show up to chat and chant with the youth of Cracow during all his visits and where thousands of people lit candles and prayed during his last days.